Tatiana Calderon is a name that’s becoming increasingly familiar. From competing in GP3 with DAMs to being Sauber Formula 1’s development driver, the Colombian driver has been a real advocate for women in motorsport.

One of her career highlights came this year when she scored a podium in the final V8 series race.

“The 3.5 car is one of the most physically demanding cars and one of the closest to F1,” she said. “To just jump in at the last race of the season was extremely encouraging and I am very happy that I did that race, especially because it was the last race and I think it also proved that I can handle a bigger car.

“I really enjoyed the car and the downforce on it. Hopefully that also helps to put a little bit of pressure on the field and it shows that I have improved this year. It was a huge relief to score a podium because I definitely had the pace in some of the races in GP3 and we were not able to capitalise on it. To have shown my potential in that car was one of the highlights of my career.”

Another one of Tatiana’s most memorable moments this year came in GP3 with the success she had at Monza, scoring 7th place in the feature race. It was particularly rewarding after a tricky start to her 2017 campaign, even if she felt that a potential podium was taken away from her with the second race of the weekend being cancelled due to torrential downpours.

“It was one of the craziest races because I started further back. We didn’t have a good free practice and then they cancelled qualifying so it was frustrating but it just shows that in racing that you never know,” Tatiana said. “We knew that we had a good car and good pace in the races, so to be scoring for the first time there was a nice feeling.

“If there’d have been a second race, I’d have started on the front row on the grid and a podium would have been possible.”

Alongside this, Tatiana has been working with the newly labelled Alfa Romeo Sauber Formula 1 team. This has included attending many races and working closely with the engineers, as the driver explained: “I’ve been to some of the races with them to understand what you need to be able to give in terms of feedback, how many people we have to work with and to have access to that amount of information as well.

“I have also been working a lot in the simulator which has helped me develop as a driver and to be more prepared for my GP3 season. To just work with Formula 1 engineers takes it to another level. I hope that I get the chance to go further with them in the future.

“One of my dreams is to drive a F1 car and I hope Sauber will give me that opportunity.” 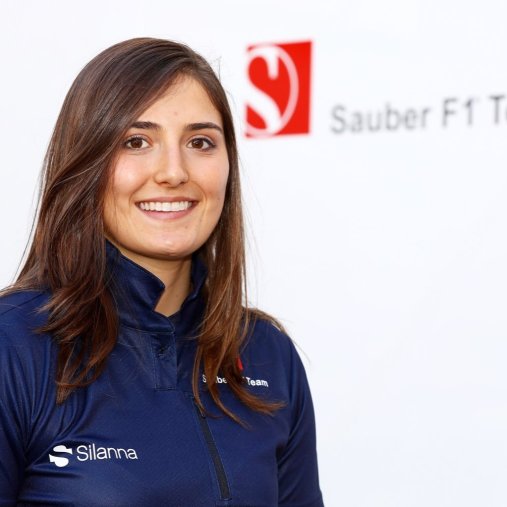 Tatiana has also spent an extensive amount of time in Sauber’s simulator, with ten or so sessions in total and completing over 160 laps each time.

“It was obviously very positive for me, driving a much quicker car than what I am used to and I think it was also positive for them to get the feedback and to get to know me better,” she said. “That is how opportunities will then show up in the future. I have made a big step and I feel ready to jump into a quicker car, with more G Forces.”

Tatiana was also keen to talk about the comments Carmen Jorda made recently, about how women will never be able to compete with men.

“With all the conversation of a women’s championship that everyone’s talking about, and that apparently we are not capable, it’s wrong to put limits on another person,” she said. “Motorsport is one of the only sports where we can actually compete against men and do a really good job. The V8 series podium I had just helps to say that we are capable of racing at the highest level. We can drive physically demanding cars quickly.

“I would say to her that it’s not right to put limits on other people. You should work hard and then we can compete. There’s no reason why we need a different, separate championship.”

Yet more proof that women need their own championship. Can’t compete with men. Nope. Just can’t do it. 😉 Bravo @TataCalde. https://t.co/yZ3lNc1BMq

This sparked further talk of how people now treat women in the sport in the paddock, and whether or not things have changed since the introduction of Susie Wolff’s Dare To Be Different.

“People are starting to realise that women can do a really good job in all areas of motorsport. That is also thanks to D2BD and the FIA Women in Motorsport that showcases girls and women who are doing a great job in motorsport. They are putting them as role models to show what we can do. That has created more equality and people believe more now that women can compete against men in motorsport in all areas.

“People always say that ‘you are quite good for a girl’ and stuff like that. Sometimes they don’t even realise that they’ve said something! At the end of the day, you get used to it. You have these expectations of what you can achieve and it motivates me when thinking about proving them wrong. It just encourages me to do well even more.”

With that in mind, Tatiana is keen to build on her progress that she has made this year. She said: “We are still looking at all of my options after the Abu Dhabi post-season GP3 test. I think that it’s more likely that I’ll be looking at spending another year in GP3. Hopefully, I’ll remain part of Sauber Alfa Romeo Formula 1 team next year.”

In addition to her GP3 campaign next year, Tatiana is hopeful to remain part of Sauber and their new partnership with Alfa Romeo.

“It’s great news for everybody; for Sauber, F1 and the fans,” Tatiana said. “The team has a lot of potential and this gives them the motivation to make a big step next year. The team has shown their potential and with their power unit next year we can be fighting for the points and midfield positions. We all want to see closer racing and we’ll be there fighting with the other teams!”

This site uses Akismet to reduce spam. Learn how your comment data is processed.

View all posts by Helena Hicks