Meet Hope Cansdale, a long-term motorsport fan and a recent employee of Pirelli Motorsport. Thanks to hard work and determination, Hope now has the role of her dreams, working with Formula 1 teams as a Trackside F1 Tyre Engineer.

With a different format to my usual interviews, I spoke with Hope to get the low-down on what working in motorsport, as an engineer, is really like.

Helena: What does your role with Pirelli entail?

Hope: Okay, in brief; I check the tyres for any defects and abnormal wear, as soon as they come into the garage. I then check the amount of rubber left on the tyres so I can report to the team a predicted forecast for each tyre, which is basically how many laps they will last.

How does this fit in with the racing?

I discuss with the team the strategy that could be used for the race, and I help them understand where they are in relation to the rest of the pit lane. I am the single point of contact between Pirelli and the team I am assigned to.

That does sound interesting. How did you land your role?

I had done a year working for three teams as a Data and Performance Engineer to gain as much experience as possible with both working in the paddock and understanding what sensors are on the car, what they are measuring and what to look out for if there’s likely to be a problem.

I got to sit with Joe Osborne and Lee Mowle in the British GT Championship and see how Joe coaches Lee on his performance by looking back at some onboard videos. I was fortunate enough that I had the opportunity to work for an endurance GT racing team where monitoring live telemetry for a 24-hour race kept me on my toes!

A job was advertised on LinkedIn for the job at Pirelli and I figured there was no harm in applying. I’d had enough of my Monday to Friday 9-5 job and wanted to get into motorsport full time. I had an interview where they offered me a 12-month contract as an ‘intern’ with the potential of an extended contract. I took a 50% pay cut, but I tried to look at the bigger picture and where this could lead me in the future.

What was your first F1 race day like in Bahrain?

Bahrain was pretty surreal. It was so unbelievably hot that the weather just drained you of all your energy. You step out the hotel and you’re already sweating so, come the evening, you just want a cold shower.

Because it was a night race, it meant we didn’t leave the hotel until lunch time so I had the morning to catch up on sleep and catch some rays.

Race day is always my favourite. The hard work is done by then and you can actually enjoy the day. We had a great result for Renault with both drivers so the atmosphere in the garage was really upbeat. It was my first GP and it still felt surreal to be wandering around the paddock with the likes of Bernie Ecclestone and Lewis Hamilton. I even spotted Naomi Campbell in the Pirelli hospitality.

Not bad, huh? So, can you dish any paddock gossip?

I have heard many a funny story. I believe that there may be some form of ‘rich people’ Tinder and there may or may not have been some drivers swiping whilst in breaks on the simulator back at the factory… 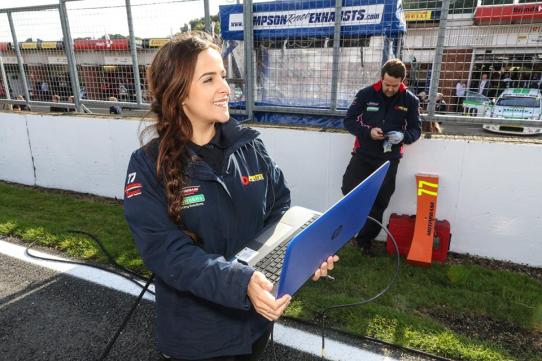 I think we shall leave that one there! In your view, how many of the people on the racing circuit are female?

I have to say the number is increasing, I have seen females in every single F1 team. There are females who run the HR and media side of things and there are a growing number of female engineers, mechanics, and truckies – strategists too. It’s still a sausage party, but it’s noticeable that the number of women is on the up. At Renault, I was fortunate enough to get to work with Helen Makey who is Nico Hulkenberg’s Performance Engineer and without a doubt someone who I look up to!

Have you ever had to deal with sexism?

All the time. So far in F1, I have been pretty lucky as I have been treated brilliantly. Almost to the point where you’re treated as such an equal that people don’t help lift your extra heavy suitcase off the airport conveyor. I am not the sort of person to refuse to let a guy help me if he offers but, equally, I don’t mind being treated like ‘one of the lads’. If I need help, I’ll ask.

In smaller racing series, I experienced sexism almost daily, to the point where I wanted to throw in the towel and go back to teaching. I have made many a chat with Ruth Buscombe – Sauber’s strategist – about some of the things I have experienced and every day she reminds me that if I don’t stick things out, this situation will not change. We both wish that someone came along 20 years ago and did all the hard work for us, but they didn’t. Now it is the time to make the change and I have to remind myself that I am doing it for my future children.

Interestingly whilst working for a German team, I couldn’t have been treated with more respect. ‘Engineer’ is a protected title in Germany and, from my experience, your career is respected much more than in the UK. It’s the first time I really felt like I wasn’t being judged based on my gender.

And from that, what is the highlight of your job?

It actually doesn’t feel like a job! I think because I spent a whole year working a 9-5 job as well as racing, I still feel like I’m going back to an office job after the weekend.

I’m fortunate in that although I am based in Didcot in Oxfordshire, the number of days in the office are so limited (60 days a year for those with a full F1 calendar) that you can live almost wherever you wish to. There are guys here that live up in Nottingham and just stay in a B&B on the nights that they need to. In that sense, my role is flexible. Oh, and the fact you can extend your stay after a race weekend.

I can’t wait to see some incredible places this year.

One thought on “Life working in Formula 1”

This site uses Akismet to reduce spam. Learn how your comment data is processed.

View all posts by Helena Hicks